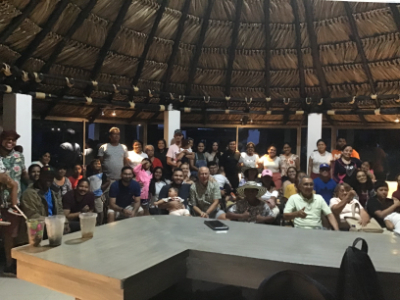 The feature picture shows the Conference Room. From Don to the left- Jose and his daughter, Jamie the interpreter and Alex to the far left. In back of Alex in the print shirt is Jose.

Rain, rain, beautiful rain!  Just what Cartagena needed.  Just what we didn’t want for our outdoor conference.  We drove about 2 hours, through the city and smaller towns into the hills outside of Cartagena. As the rain poured down, the car came to a stop at a peaceful spot atop a hill overlooking hills and valleys, towns and fincas (small farms). Everywhere you looked there was green, all shades of green.

We’ve seen these retreat places in all of the cities. They provide a wonderful place of escape from the congestion and noise of the city.  In a culture were most live in connected houses where your neighbor’s music, on both sides, is the music that you listen to, their arguments become your entertainment.  The streets are crowded, the buses packed, the houses small. These fincas provide a peaceful place to get away.  They can be used for family gatherings, training centers, etc.  The one we went to had a large pool with designated child area.  Adjacent was a large cabana to meet/eat in.  That is where we started out.  But as the rain came down, so did the temperatures.  One English speaker came up to me and said he felt like he was in Alaska.  It was probably more like low 70s.  So we moved into another building that has glass widows all the way around so we could still enjoy the view.

When I say it is raining here, I mean a torrent of rain!  We are on a hill and still the grass squished under our feet.  There are puddles everywhere – and they keep getting deeper.  On the streets it is past ankle deep, Alex explains to us that the sewers are full and backing up into the streets.  There is no other choice but to walk in it.  Cars wade through, some stalling out, others seeming to float.  Our greatest concern is for the motorcyclists who don’t seem too bothered.

The retreat got underway late.   We were waiting for our translator to show up.  Alex pinch hits as we await his arrival.  He’s coming on a motorcycle!  Later we find out that his chain broke on the bike and the clutch went out.  So he had to walk the motorcycle to a shop, buy the parts, borrow their tools and fix it.  Everyone was relieved to see him.  His name is Jamie and he was one of Don’s students years back at SRL.

At break time we headed out into the torrents of rain to an outdoor kitchen/bar area. Behind the bar is open kitchen where the women of the church cooked in boiling oil homemade empañadas, some filled with beef, others with a soft cheese. Lunch consisted of a grilled pork steak and boiled potato.  The steaks were “excellente” – you bring the charcoal, they provide the grill.  Everyone mingled around and the kids ended up in the pool.  Later in the day we continued the conference.

On the way home Alex was telling us how he came to Christ.  It was through his sister.  He began going to his aunt’s charismatic church with his sister.  Don’t ask us how, but the aunt was given an RC Sproul book which she didn’t want to bother reading and gave it to Alex. That’s what lit the spark in him and he shared it with a study group which included Edie and Louise, another pastor from the Nation of God church. (I will explain later).  The rest is history.

So, we find out this trip that there is actually another pastor in the church.  His name is Louise.  He was originally the pastor of the Nation of God.  But during the pandemic he could not provide for his family and went into debt.  So, to pay off his debts, he went to the US to work.  He’s been in New York City and is now in Utah.  He hopes to return with enough saved to buy a  house and help the church.  So these guys have been meeting with him virtually for the past two years.

Pastor Edie has gone through some very trying times as well. His son’s appendix burst, and he was in the hospital for over 2 months!  While going through that his son also had water on the lungs and twice had to be resuscitated.  At one point they called the family in, telling them that he was not going to make it.  Edie’s wife two days later gave birth to a child.  Edie was simultaneously having thyroid problems and lost a lot of work.  (On the side he cuts hair at his home which is very common here and works odd jobs).  Consequently they had to move into an even smaller house.

To end on a fun note, imagine all three of those guys – Edie, Louise and Alex in a Christian rap group – they were!  We can totally see it.