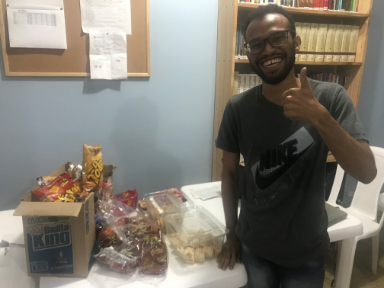 I spent the time during the evening session speaking to Andrew.  He wanted to practice his English with me.  This is his testimony:  He was raised in the coastal area of Santa Marta/Barranquilla.  His father left the family when he was 1 and moved to Medellin.  His mother works as a house cleaner to support him and his sister who recently had an illegitimate child.

Andrew has a speech impediment.  It’s either that or the result of a large overbite and wide space between his two front teeth.  The kids mocked him at school.  Now the other students at the seminary are working with him to sound out words.  His English is pretty good.

When Andrew was about 8 his mother got up one Sunday morning and announced that they were going to church.  So off they went to a Pentecostal church.  He really liked it and wanted to go back, but they never did.  He knew about Christ but had no religious training. When he was 16, alone in his room he called out to God telling Him that he wanted to surrender his life to Jesus.  His mother came into the room and saw him crying. When he told her why he was crying, she told him that he was crazy.  It wasn’t too long after that that we went to live with his father in Medellin.  That was six years ago.  When he told his father  that he was a believer, his father stopped talking to him.  They have not spoken in 5 years.  No one can understand why he wants to attend the seminary or why he wants to be a disciple of Christ.  His mother is always fighting with his sister.  As we would say “it’s a mess.”

He is in his 3rd year at the seminary and wants to continue his studies.  He’s 26.  In the picture you will see him standing in front of a table with some snack items on it.  That is his store.  He buys a large bag of individual bags of chips, cheese curls, Doritos, and Twinkie type snacks and sells them to the students, making a small profit.  That is what he uses to live on.  Occasionally he even sends money home to his mother!  When I asked him how this could possibly be, he told me that God blesses his little store!